The Rome Cavalieri is home to one of the greatest private art collections in the world with over a thousand treasures ranging from 16th Century masters to contemporary art; from Nureyev’s ballet costumes to Gallé glass. 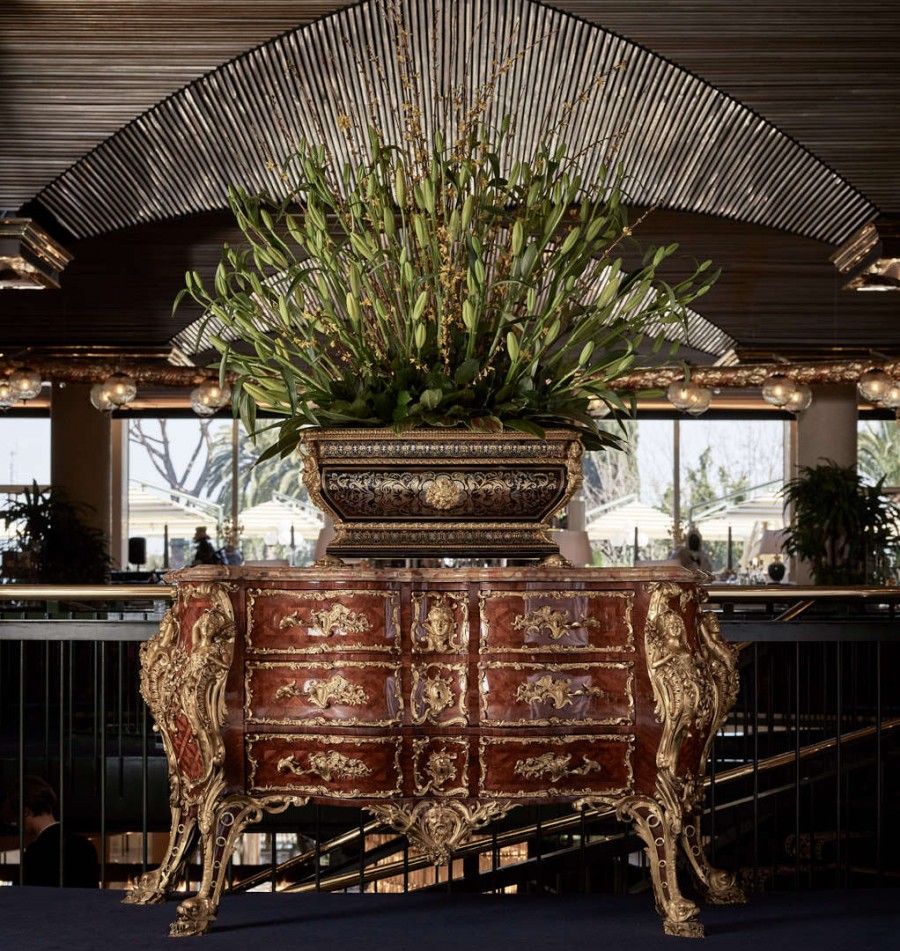 The King of Poland’s Commode

This splendid commode belonged to the Prince-Elector of Saxony, Friedrich August II, who later ascended to the throne of Poland under the name Augustus III. It was ordered for the Royal Palace of Warsaw in 1745, and it was later purchased by the Rothschild family, who placed it in their majestic Vienna residence. Today, a similar commode, also belonging to the Rothschilds, can be admired at the Getty Museum in Los Angeles.

Both were placed on the art market by famous art dealers, George and Daniel Wildenstein.

Before being included in our collection, this commode belonged to Syrian patron Akram Ojjeh, and Englishman Charles Clore.

It stands out for its inlay work and gilded bronze décors made by skilful French cabinet makers and bronze sculptor Jacques Caffieri. The initials, MC, stand for Maison Couronnée and indicate that this piece of furniture was intended for the royal palace. This commode is an extraordinary example of French Rococo, which was very much in style also at the Warsaw Palace, since Princess Marie, the daughter of the deposed King of Poland, Stanislaw Leszczynski, had married Louis XV, King of France, in 1725. 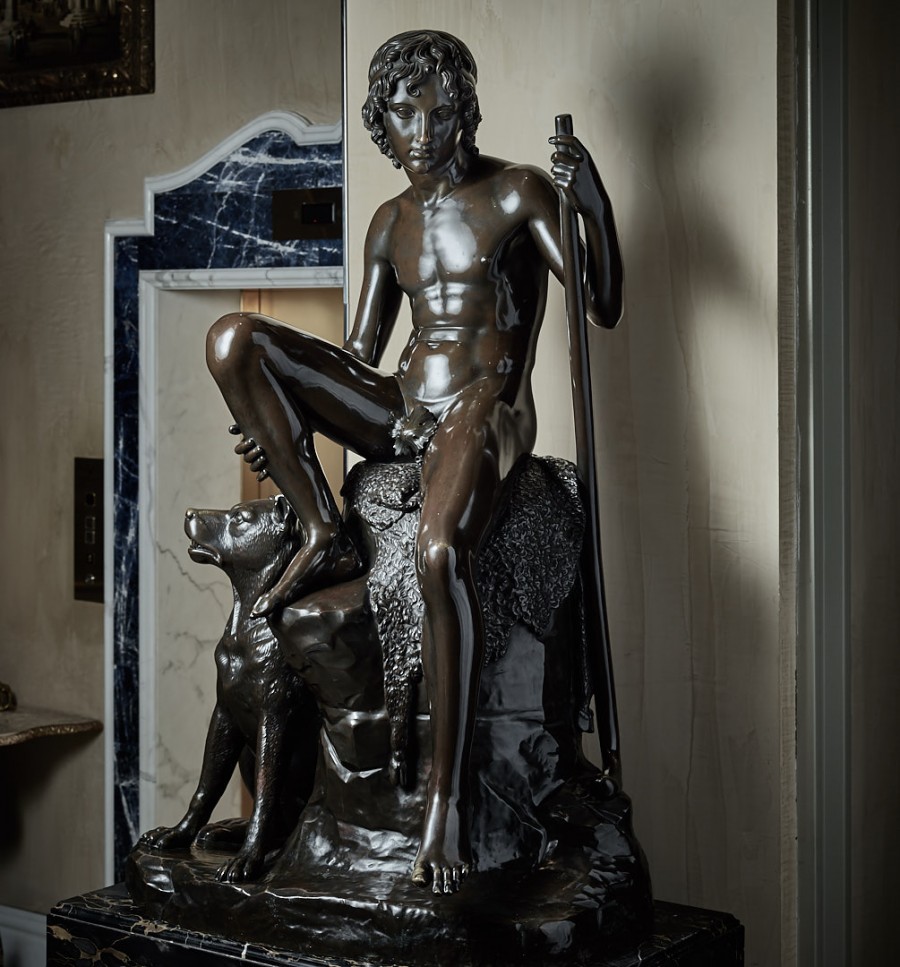 The bronze statue to the right of the lifts is the “Shepherd boy with dog” by Danish sculptor Berthel Thorvaldsen.

Together with Antonio Canova, Thorvaldsen was one of the best-known exponents of neoclassical art and certainly one of the most important sculptors working in Italy in the early nineteenth century. For many years, he lived in Rome, where his enthusiastic clients included Pope Pius VII. He once said: “I was born on the 8th of March 1797 [when he arrived in Rome], before then I did not exist.”

The statue of the shepherd boy was inspired by a young Roman model, whereas the dog portrays Teverino, Thorvaldsen’s dog. The marble prototype of this  statue is kept at the Hermitage in St Petersburg.

The History of the Emperor of China

The large tapestries displayed on the left wall of the hall are part of a series of nine episodes called “L’Histoire de l’Empereur de Chine,” i.e. The History of the Emperor of China. The scene depicted here is The Audience of the Emperor, which is the most famous and most frequently reproduced of the entire series. Other replicas can be admired at the Metropolitan Museum in New York, J. Paul Getty Museum in Los Angeles, Louvre in Paris, Alte Residenz in Munich, and in San Francisco. 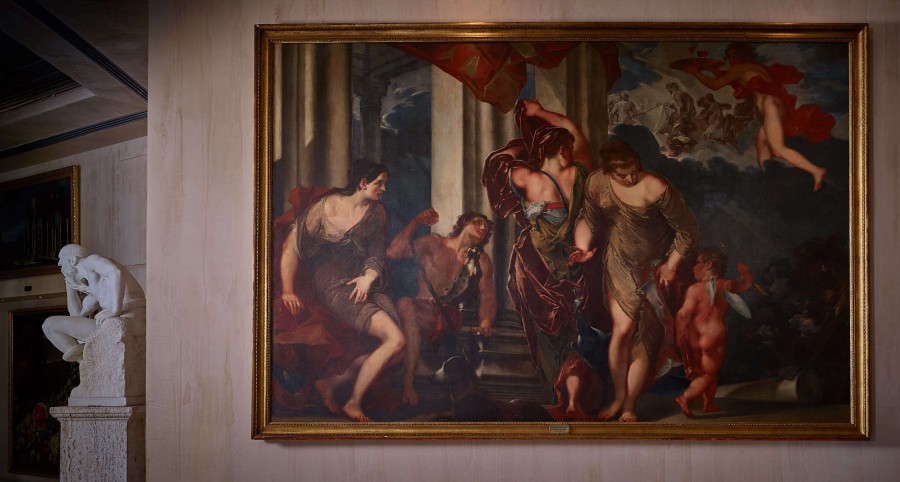 This mythological story starts with the wedding of Peleus and Thetis, parents of Achilles. All the gods were invited to the ceremony on Mount Pelion, except for Eris, goddess of discord. When Eris showed up at the celebrations and was turned away, she decided to seek revenge by throwing a golden apple addressed to “the fairest.”

The apple was so precious that everybody wanted it. Three goddesses claimed it: Hera, Athena, and Aphrodite. Zeus was asked to decide the issue, and he ordered Hermes to lead the three goddesses to Paris of Troy, who was considered the most beautiful human being on the planet. He was to decide who was the fairest of the three. 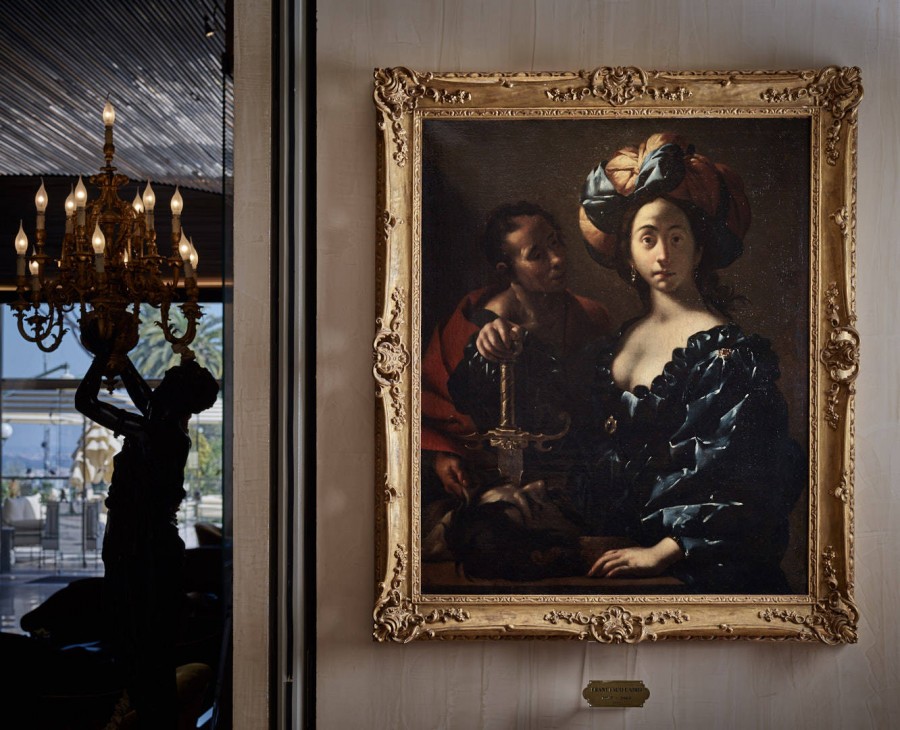 Judith with the head of Holofernes

Painted by Francesco del Cairo in the early seventeenth century, this painting draws attention for its great balance and delicate elegance. The attention is drawn to the turban, the sword hilt, and the jewels that embellish Judith’s dress, with the same care and eye for detail of still life masters. Judith, who seems to be staring at us with pride and dignity, fascinates and seduces with her strong personality. The Jewish widow seems to be fully aware of the tragic yet necessary beheading of the enemy general. Her glance is so intense and magnetic that it’s difficult to shift the attention to the silk turban and the elegant dress, where lace and embroideries merge in the black shadow full of nuances. On the foreground, the sword hilt and the severed head of Holofernes emerge on the bottom left, and the powerful chiaroscuro draws the viewer’s attention to the eyes of the biblical heroine. 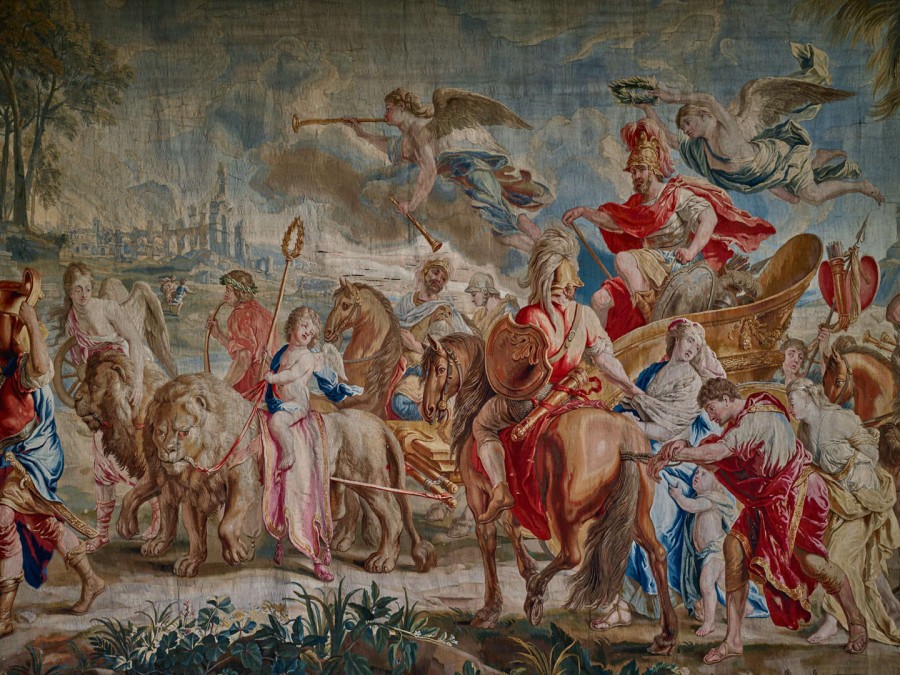 This tapestry of exceptional size measures almost eight metres in length. It represents the Triumph of Mars and was made in the early eighteenth century in the prestigious Leyniers workshop, a dynasty of famous tapestry manufacturers, who operated successfully in Brussels for over three centuries. This tapestry is part of the “Triumph of the Gods” series, most of which is kept at the Gand Museum. The tapestry cartoon was by Jan van Orley and seems to have been inspired by the renowned Triumph of Alexander the Great, which had been painted a few decades earlier by Charles Lebrun, the founder, and supervisor of the Manufacture des Gobelins. The scene depicted here shows the god of war on a chariot pulled by two lions, accompanied by a magnificent procession. 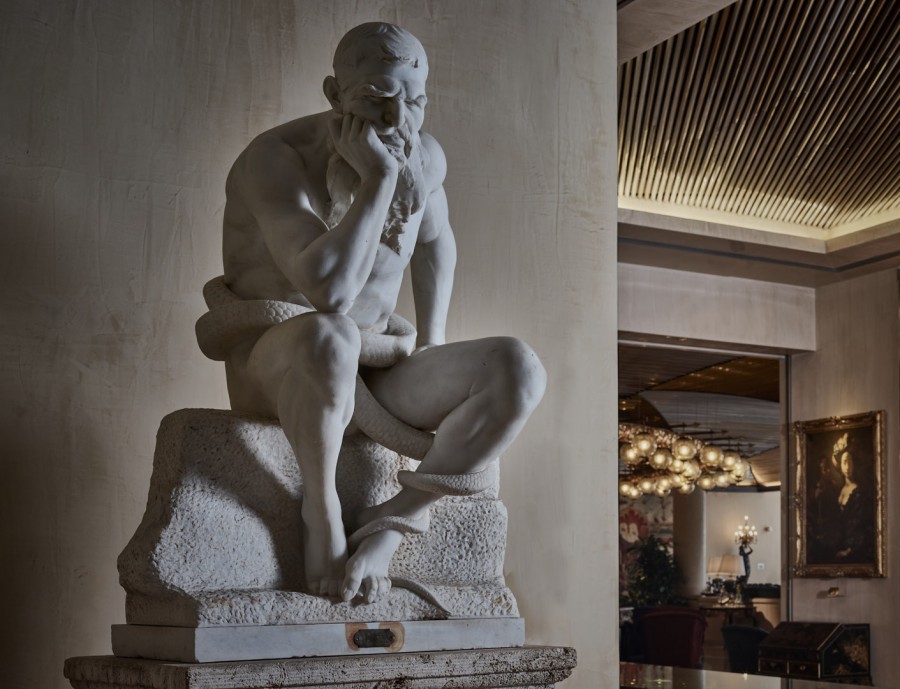 This white marble statue was made at the end of the nineteenth century by Cesare Zocchi. It portrays Minos, King of Crete, son of Zeus and Europa. According to the myth, Minos prayed to Poseidon for a sign to demonstrate his right to the throne. Poseidon sent a magnificent white bull, which Minos was committed to sacrificing to Poseidon. But Minos broke his promise and sacrificed another bull instead.

In a fit of rage, Poseidon cursed Pasiphaë, Minos’ wife, who fell in love with the bull, giving birth to the Minotaur, a monster, half man half bull, which fed on human flesh. Minos had Daedalus build an impassable labyrinth and imprisoned the Minotaur in it, forcing Athenians – who at the time were under Cretan rule – to sacrifice seven young women and seven young men to the Labyrinth every year. The terrible ritual was interrupted by Theseus, who managed, with the help of Ariadne, to find his way in the Labyrinth and kill the Minotaur. 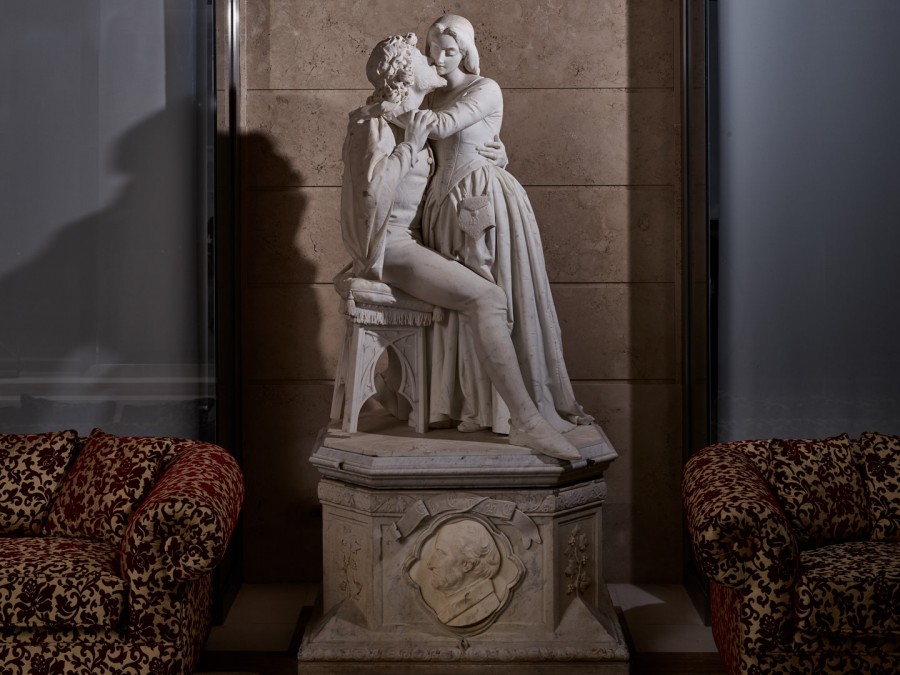 This marble sculpture by Antonio Tantardini is called The Kiss and dates back to 1861. Tantardini studied at the Brera Academy. He was extremely talented and soon became a successful sculptor. Many of Lombardy’s most important monuments of the time, but also numerous portraits of historical figures and local notables, were made in his workshop, also thanks to his many collaborators.

A smaller version of The Kiss is displayed at the Gallery of Modern Art in Milan with the title “Margaret and Faust.” It was suggested that the two lovers in the sculptures depict the main characters of Goethe’s play with the same title. Even if their identity remains a mystery, the quality of the sculpture is evident. Notice the attention to detail and the technical skill in sculpting the clothes, the embroideries on the handkerchief in the young woman’s hand, the flowers, and the dowels of the stool, which is slightly leaning forwards to suggest the sense of movement and passion of the scene. 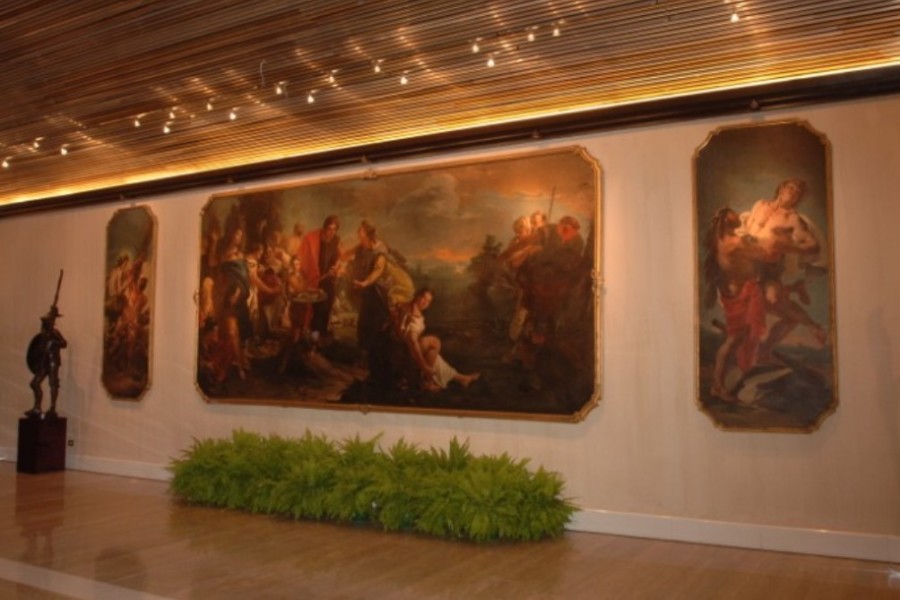 These are the three most precious paintings of the entire collection. A true triumph of eighteenth-century art, a sublime treasure of museum quality and prestige. These three large canvases by Giambattista Tiepolo dates back to 1725. The large painting in the middle is called “Odysseus finds Achilles among the daughters of Lycomedes.” The painting on the left is “The Flaying of Marsyas” and the one on the right, “Hercules and Antaeus.” 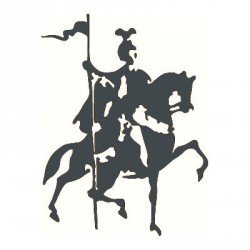